A Quick History of the Orcas Island Sportsmen Club

Begun in 1946 as an informal group of men who met monthly at either different persons’ houses, island resorts or at the picnic shelters at Moran State Park and loosely referred to themselves as The Rifle Club.    By 1949 they called themselves the The Poggie Club of Washington, Orcas Island Chapter.  Poggie Clubs were popular statewide in that era and were rooted in bringing together like-minded individuals who enjoy hunting, fishing and being responsible stewards of the land.  Poggie Clubs still exist.   The Poggie Creed:  “I am a sportsman.  I guard the rights of my fellows in field and on stream.  I respect the rights of all on whose property I seek my sport.  I take my game fairly.  I do not waste what I take.  I protect and conserve.  This is my creed: That I and my children and my children’s children may enjoy forever the sports my State and Nation have given me.”  By 1953 the Club’s name had changed to the Orcas Island Sportsmen Club.

Initially, The Club was quite active in state and local legislative matters that dealt with conservation and local resources.  Past Club minutes refer to sending delegates to various regional and statewide meetings on matters having to do with fish traps, overfishing, and fish regulations and declining salmon populations noted even in 1950.  Members were involved in stocking bass in local lakes and had concerns of Japanese fishing North American waters.  The members were also active with hunter education and safety, gun laws, seeding island land for deer, pheasant and quail, securing goodwill with island landowners so members could hunt responsibly and of course, swapping stories and fish tales was ever-popular.  Members involved their families by having potlucks, pie bakes, and picnics routinely.  Garage sales were held occasionally to raise money for club operations and stipends for attending off island meetings.  Members were creative in their fundraising, including fining members for swearing at 25 cents per infraction.

The Club had no “home base” and was searching for land to purchase.  A landowner named Sponauer in Deer Harbor gave permission to trap shoot there and discussions were underway also with someone named Hill.  After several false starts, with different persons willing to sell but at prices the Club could not meet, logger Bud Kimple wanted to buy 80 acres that ran from the area of our now Club down to Beach Haven.  He needed $2,000 to buy the 80 acres and asked his brother Ray Kimple to loan it to him.  Ray agreed- with the caveat that when the logging was done, in repayment Ray got the 40 acres south of the Club down to Beach Haven.  Founding Club Member and third of four brothers, (Dillon, Ray, Bob, Bud and cousin Bill Kimple) Robert Kimple asked Bud and Ray Kimple to sell the other approximately 40 acres to The Club on terms they could afford.  It is said the Club bought the acreage for $1,000 in 1952. The Club now had a home at 1906 Enchanted Forest Road and had begun setting money aside for a building fund.  After years of work parties, the Club House was completed in 1957.  Some vague documentation makes reference to a defunct garage gifted by Moran State Park that came to the Club and was remodeled into the Main Club House. (The main Club House was remodeled again by generous club members in 2008 due to roof, floor and sill-plate rot.)   Initially, The Club made a joint-use rifle/pistol range and in 1965-67 the trap range and trap house were set.  The membership saw an increased interest in pistol shooting in the early 1980’s, thus a separate Pistol Shed was built.

As with any club, the interest of various events/activities waxes and wanes with membership.  The Club seems to have always had roughly 100 members.  Initially, rifle shooting and rifle target competition was very popular.  Then trap shooting grew, especially after formal trap grids were constructed.  And in the mid 1980’s air pistol competition was also taking place on the premises inside the current Club House.  Also in the mid 80’s, interest in pistol shooting grew with a contingent of competitive pistol shooting taking place, such that the pistol and rifle ranges were separated and a Pistol Shed was constructed with its own range.  Many members competed statewide and even at Olympic Qualifications for both air and pistol shooting. 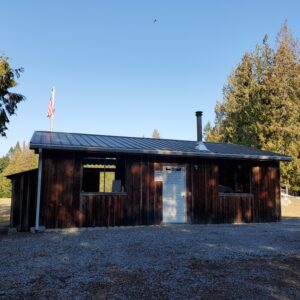 You are invited to visit our Club and decide where your favorite interest lies – Trap, Sporting Clays, Five-Stand, Pistol Shooting, Rifle Shooting.